Plant Manager For A Day

Every year, Vulcan’s Manteno Quarry in Illinois welcomes first-grade students from Manteno Elementary School to tour the facility and learn about construction aggregates and Vulcan’s environmental initiatives. One student, 7-year-old Cole Pilbeam, used what he learned from his Vulcan field trip to make a difference in his community. After finding out about Vulcan’s environmental stewardship, Cole decided to do his part as well and began cleaning the local sewage drains in his neighborhood.

While wearing his hard hat, gloves and safety vest, Cole takes his little red wagon around the neighborhood and picks up the leaves and garbage blocking local stormwater drains. “He’s really concerned about all the animals, so he doesn’t like seeing all the garbage laying around and he doesn’t like to see the drains backing up and all the garbage down into those drains,” said Cole’s mom Megan Pilbeam.

Megan decided to share Cole’s good work on Facebook, where the local newspaper, the Kankakee Daily Journal, picked up the story and wrote a feature about Cole. “Cole’s commitment to keeping his street and storm drains clean grew from the field trip’s lesson on why it is important to protect the environment,” the article stated. After Megan’s Facebook post went viral throughout the community, Plant Office Administrator Kelly Kircher caught wind of Cole’s story.

“I was just super proud that something had become of our tour and so of course when I got to work I had to share it with everyone,” said Kircher. “We never get to hear the story after the tour so it was just great to finally see a story come through that had really made a difference in a child’s life.” Once the Manteno team learned more about Cole’s work following his Vulcan field trip, they decided to invite him back – but this time as plant manager for a day.

“We’re very excited about this,” said Plant Manager Cary Lampert. “What we’re going to do is have him sign in, we have safety guidelines that we have everyone view and sign and then we’ll have him go around the quarry and talk to the guys a little bit, have him sit at the desk,” Lampert explained. “He’ll just be exposed to the guys, exposed to the environment.”

To start the day, Vulcan presented Cole with a custom hardhat and safety vest with his name, along with safety glasses. Grainger also donated construction cones to help Cole stay safe as he continues his environmental endeavors throughout the community. But Cole didn’t arrive empty-handed either. Cole brought all of his ‘employees’ peanut butter and chocolate chip cookies, promptly telling his new employees that the cookies were to be considered their raise for the day.

Teaming up with the ‘former boss’, dubbed ‘Crazy Cary,’ Cole and Cary made their way throughout the plant, meeting the employees and learning about the operation. One employee even daringly asked, “Hey boss man, can we have cake and ice cream today?” Cole quickly responded, “Actually, today we’re having cookies and popsicles!”

Additionally, Cole had the chance to test the pH level of a water sample, get up close to the facility’s equipment and weigh customer trucks as they were leaving the facility. Cole did such a good job, some employees wished he could stay the boss. But Cole politely thanked them and reminded them that he had to get back to school after summer break.

Rounding out the day, Cole was presented with a series of gifts from Vulcan including a backpack, kids chemistry set, tri-fold shovel and windup flashlight. And to help commemorate his official duty as plant manager for the day, Cole was presented a plaque which stated: On this day, August 14, 2019 Cole Pilbeam is recognized as plant manager for a day. Demonstrating and abiding by The Vulcan Way, doing the right thing, the right way, at the right time. 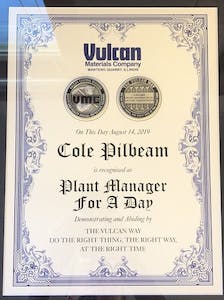 “For all of your hard work we wanted to give you this,” Lampert told Cole. “I know all the guys enjoyed you. Hopefully they let me be the boss again.” Cole’s mom was brought to tears and added, “We are super proud that this is something that he really cares about and wants to keep our community clean and safe for everybody.”

When asked about his favorite part of the day, Cole answered, “Crazy Cary,” with a beaming smile on his face. Lampert was happy to let him take over as plant manager stating, “He could be the future leader or CEO of the company, or an employee.” Cole agreed saying, “I’ll do this when I grow up.” 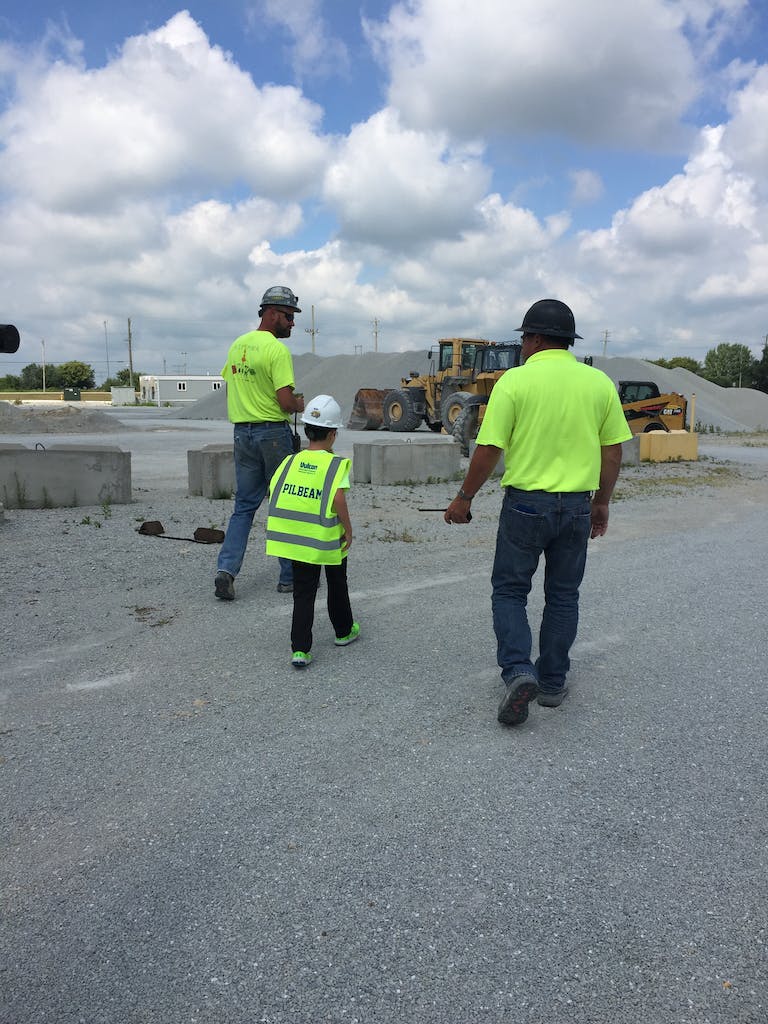 Until recently, the small, aging runway at the McGhee Tyson Airport near Knoxville, Tennessee has limited the economic boost the airport could provide. Vulcan was offered the opportunity to supply the majority of the materials required for runway expansion exspanion, but this opportunity didn’t come without its challenges...